German National Mr. John V. Schneider-Merck, Bin Ghassons's CEO, has a colourful history in business dealings and his contacts and networks are not limited to the Middle East but spanning a web all over the globe.

Early in his business career he worked in Peru and established formidable contacts all over South America.

He has been appointed the assistant to the General Manager of the Peruvian-German Chamber of Commerce in 1969.

A native German speaker, John is fluent in English and Spanish.

Sent to the UAE on a short term business assignement in 1976, John decided to use this          " once in a lifetime " opportunity to stay in Dubai, where he founded Bin Ghasson General Trading in 1982.

After more than 30 years in the UAE, John's contacts to Governments, Royals, the Media and the most powerful people in business make him a legend in the Middle East.

Today he is a truly global entrepreneur and he helped many companies to establish a business presence in the complex Middle Eastern market place.

John has been a member of the board of Directors at the Germanl School in Sharjah and he is a Trustee at the German-Emirati Chamber of Industry and Commerce. 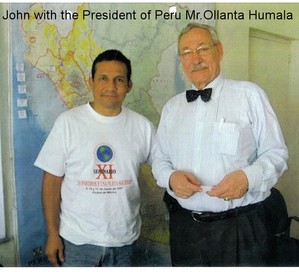